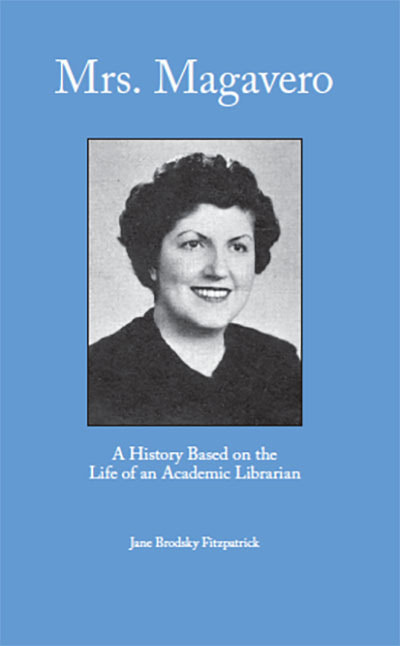 Mrs. Magavero: A History Based on the Career of an Academic Librarian

Filomena Magavero worked for fifty years at the Stephen B. Luce Library at SUNY Maritime College in the Bronx. For twenty five of those years she was the only professional woman on the campus. Mrs. Magavero: A History Based on the Career of an Academic Librarian describes the career of a strong and dedicated librarian in the mid 20th century through an oral history, and uses her story as a window into what was happening in the library profession in the pre-feminist era. Neither the library profession nor society as a whole, during her first two decades at the college, offered any encouragement or support for equal pay or better status.

A very useful review of the library literature relating to the status of women, including articles, surveys and studies by librarians in journals, books and dissertations, focuses on the years Magavero worked at the Maritime College. A brief history of the Maritime College itself, part of a unique group of institutions, is also included. Through this placement of Filomena Magavero’s oral history in the context of what was occurring in the library profession at the time, the reader will see that women librarians were in fact a “Disadvantaged Majority” through this time period. Even the American Library Association (ALA) did not pay serious attention to women’s issues until the mid-1970s. Moreover, there was little or no library literature or research focusing on women in the profession. What was written dealt mainly with public librarians, because women were a minority in academic libraries. Women were more prominent in the lower-status libraries and less likely to advance to positions of leadership in academic (higher-status) libraries.

Examining the library profession from a feminist standpoint, for the period roughly corresponding to Magavero’s career, from 1949 to 2003, adds to the history of women librarians in the middle of the twentieth century in the United States. With the Second Wave of feminism came an expansion of research into women’s history which produced an entirely new method of discovering and understanding women in history. Major texts which redefined historic methodologies from a feminist standpoint, but the history of women in academic libraries remains hidden in archives and special collections. This oral history should stand as another small step towards further research into the hard to find, but existing, women’s history in libraries in the United States in the 20th century, and hopefully will bring more memoirs and biographies into the public eye.