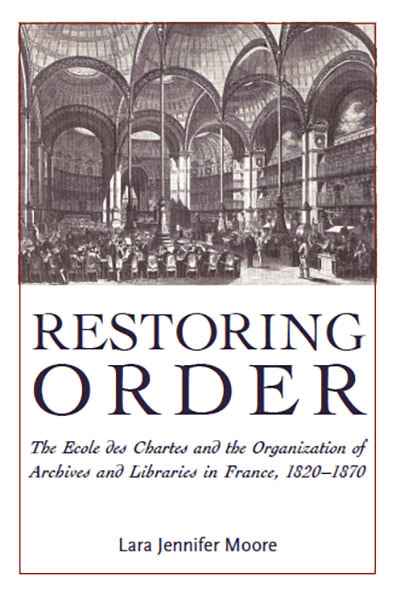 Restoring Order: The Ecole Des Chartes and the Organization of Archives and Libraries in France, 1820-1870

This book is number 1 in the Series on Archives, Archivists, and Society, Richard J. Cox, editor.

Between 1789 and 1793, the revolutionary French state nationalized thousands of libraries and archival depositories, thus becoming the proprietor of many millions of books and documents, ranging from Montesquieu’s Persian Letters to proclamations signed by Charlemagne. Unsure whether to condemn these materials as vestiges of feudalism and tyranny or to preserve them as the core of the nation’s historical patrimony, the revolutionaries initiated a series of contradictory plans to remake French archives and libraries. Few of these plans were carried out, however, and by 1800, most of the collections nationalized during the revolution sat abandoned and deteriorating in provincial warehouses. This book is about how the French governments of the nineteenth century dealt with the collections left behind by the revolution. What did they choose to preserve, or ignore? How did they distinguish between the authentic sources of national history and the irrelevant debris of a bygone age? How did they organize the materials they did deem relevant into a national network of libraries and archives? And who did they imagine would use these new collections? Who was included in the post-revolutionary “public”? According to most histories of French archives and libraries, the nineteenth century was a period of slow but steady recovery from the trauma of the revolutionary era. Confronted with the “chaos” of the nationalized collections, it is said, a few forward-thinking archivists and librarians gradually restored bibliographic and documentary order, sheltering the state’s collections from destruction and decay, preparing suitable catalogues, and improving public access. In contrast, Moore argues that the organization of archives and libraries in nineteenth-century France was neither steady nor progressive. By following the development of the Ecole des Chartes, the state school for archivists and librarians, Moore shows that conceptions of “order” changed dramatically from one decade to the next. More important, she argues that these changing notions of “order” were directly connected to contemporary shifts in state politics. Since each new political regime had its own conceptions of both national history and public knowledge, each one worked to “restore order” in a different way.