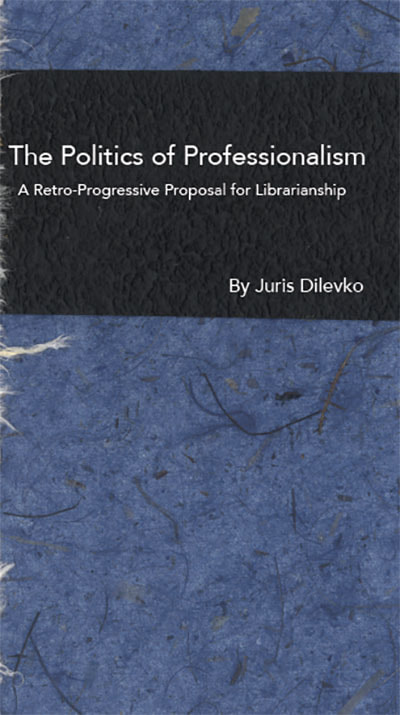 The Politics of Professionalism: A Retro-Progressive Proposal for Librarianship

This book presents a retro-progressive proposal for the education of librarians: the removal of library education from the jurisdiction of universities, which in recent decades have become increasingly corporatized, internalizing market-based concepts such as performance metrics and “audit culture” to the extent that, ideologically speaking, they are indistinguishable from corporations. Accordingly, education for librarianship should reject the science- and technology-based information model that is associated with university-based library education and whose origins can be traced back to Charles C. Williamson, especially his article “The Place of Research in Library Service” in the early 1930s. Instead, building on Ralph Waldo Emerson’s “professor of books” model, Dilevko suggests that anyone wishing to work in an academic, research, or public library must independently pass a series of essay-type subject-specific examinations in about ten to fifteen fields or areas of the arts, social sciences, and sciences. In addition, he or she must be able to read and speak at least one non-English language fluently, as well as attend courses about various aspects of the operation of libraries at regional summer institutes.

With its emphasis on subject-specific knowledge, this proposal would reintellectualize librarianship, allowing librarians to deliver meaningful educational opportunities to users in venues that function as bulwarks against what Susan Jacoby labels as the “culture of distraction.” Libraries would become, in the words of David Levy, oases and sanctuaries conducive to “sustained reflection and contemplation.” Because aspiring librarians would not be required to earn university-level professional degrees, they would no longer be obsessed with being thought of as professionals, nor with enhancing their professional standing. This would be a positive development because the notion of professionalism has devolved to a point where it is more about credentialism, careerism, and the accumulation of power and prestige than about the possession of meaningful knowledge that can be turned toward social good.