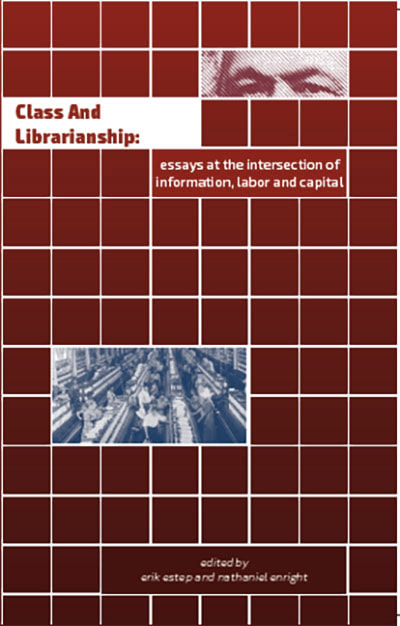 Class and Librarianship: Essays at the Intersection of Information, Labor and Capital

The current crisis of capitalism has led to the renewed interest in Marxism and its core categories of analysis such as class and exploitation. In our own discipline — Library and Information Science — voices and ideas that have long been confined to the critical margins have been given buoyancy as forms of critique have gained traction. This volume allows for a fresh look at at the interaction of information, labor, capital, class, and librarianship.

The Academic Library as Crypto-Temple: A Marxian Analysis, by Stephen Bales

Social Reproduction in the Early American Public Library: Exploring the Connections Between Capital and Gender, by Alexandra Carruthers

From Steam Engines to Search Engines: Class Struggle in the Information Economy, by Amanda Bird and Braden Cannon

Working with Information: Some Initial Enquiries, by Steve Wright

Poverty and the Public Library: How Canadian Public Libraries are Serving the Economically Challenged, by Peggy McEachron and Sarah Barriage

Lost in the Gaps: The Plight of the Pro Se Patron, by Carey Sias