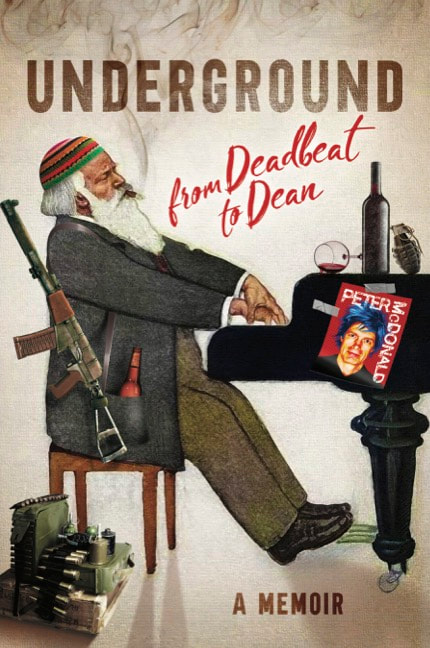 Underground: From Deadbeat to Dean A Memoir

In this engaging, often hilarious memoir of a life in punk rock, one-time music promoter and longtime librarian, Peter McDonald, takes us on a wild tour where as a boy he heard a firefight between Che Guevara and armed militia in the Venezuelan jungle on to living with a young street urchin named SAMO who would go on to become the artist Basquiat. At once poignant and part confessional, this memoir is perhaps like no other in that it becomes in the end a journey of spiritual awakening out of one man’s disillusionment with the rock’n’roll industry. From a boyhood in the tropics, to boarding schools in Europe, on to shamanic training in the Northwest, we follow an itinerant iconoclast in this riotously engaging work. McDonald traces his coming of age during the Vietnam War, which he narrowly avoided by going to college in Canada. He would then come to spend five years alone in the Alaska wilderness that forged in him a lifelong devotion to environmental advocacy and stewardship. It is certainly an otherworldly journey that is part imagination, part fable, and unapologetically the author’s own truth.

McDonald writes with forthright honesty about all these vicissitudes. With an FBI file for political arrests, to national recognition for his writing and scholarship, McDonald eventually brought his wide experience and deep commitment for social justice to his choice of a profession in librarianship. He rose to become Dean of Library Services at Fresno State from which he retired in 2019. As a co-founder of the Progressive Librarians Guild in 1989, McDonald went on to serve as editor of many scholarly journals, as well as the governing Council of the American Library Association. This is his story.

Back in Stock - Order Now!