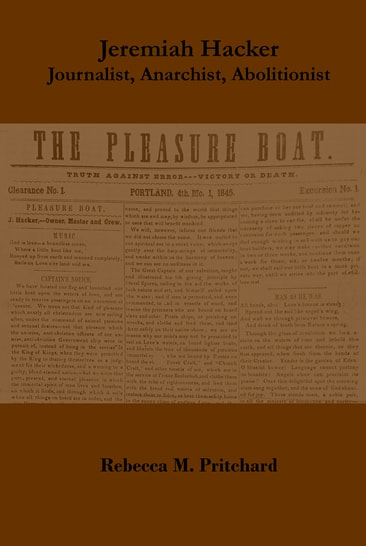 "We had much rather be all alone in the right than with the whole world in the wrong.”

So wrote Jeremiah Hacker in 1862. He was the main writer and editor of The Pleasure Boat, which may have the distinction of being Portland, Maine’s most controversial newspaper. Inspired by his Quaker background, Hacker worked to end slavery, poverty, and inequality of women through his writing. He spoke out against prisons, advocating instead for reform and education. He broke with all forms of organized religion and urged people to leave their churches and find moral direction from within. He promoted no political party, believing people would be better off without government. He was in favor of land for all. The most controversial of Hacker’s radical ideas, however—and the one that lost him the most readers—was his advocacy for peace as the country headed toward Civil War.

Hacker’s life spanned the nineteenth century (1801-1895). His work was widely read and he himself was well-known in his lifetime. But both he and his ideas have largely been forgotten—until now. This book explores the life and writings of Jeremiah Hacker, returning him to his rightful place in history, and showing how his words were an important part of what helped to forge that history.